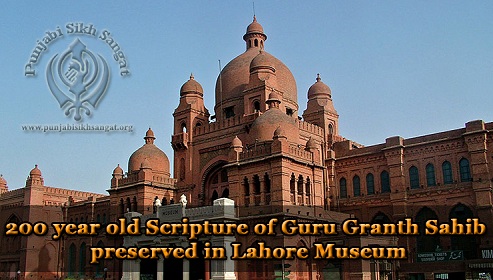 LAHORE: The 200-year-old holy book of Sikhism has been placed in the Palki Sahib of the Lahore Museum.

It has also been decided that separate galleries containing artefacts of the Sikh community will be created in the museum. Hundreds of artefacts belonging to the Buddhist, Hindu, Jain and Sikh communities are preserved in the Lahore Museum. Among the artefacts is the principal scripture, Guru Granth Sahib, written by the 10 gurus of Sikhism. The scripture is regarded by the Sikh community as the final, sovereign and eternal living guru. This scripture was written at the start of the 18th century which was preserved in the era of Maharaja Ranjit Singh. Later, this rare manuscript became a part of the Lahore Museum.

According to Sikhism, there are special ways and methods of preserving the Guru Granth Sahib. The Lahore Museum has placed the scripture in the Palki Sahib, keeping in mind the religious traditions of the Sikh community. The gift of Palki Sahib was given by a local Sikh Sangat. Palki Sahib has been specially prepared.

Gallery In-charge Aliza Rizvi told The Express Tribune that if there are any scriptures among the preserved antiquities, we always consider the rituals of the religion while preserving them. “Members of the Sikh community place the Guru Granth Sahib in the Palki Sahib so we follow their traditional ways by keeping this ancient scripture in the Palki Sahib.

She maintained that the museum has a large number of scriptures from the Sikh era which is why there was a need to create a separate gallery for Sikh scriptures. The gallery of scriptures will be created in the next few days. Government College Professor Kalyan Singh said that his fifth Guru, Guru Arjan Devji, started the arrangement of Guru Granth Sahib in the year 1603. In addition to the first four Gurus of the Sikhs, the books of Muslim Sufis and Hindu devotees have also been included.

The arrangement of the Guru Granth Sahib was completed in 1604. Later, the works of the remaining five Guru Sahibs were added. The book of the 10th Guru, Gobind Singh, is known by the name of Dasam Granth. The 10th Guru of the Sikhs issued an order in 1708, a year before his death that there will be no guru after him and that Guru Granth Sahib should be considered as the community’s book of guidance.

Guru Granth Sahib consists of 5,894 poems in which the works of 10 gurus and 15 Muslim Sufis and Hindu devotees are included. Granth Sahib is divided and organised into 18 different chords. Many languages are used in Guru Granth Sahib including Punjabi, Multani or Seraiki, Persian, Prakrit, Hindi, and Marathi. In addition to Hindi and Punjabi, knowledge of Persian is essential for its basic understanding.

Another old scripture of Guru Granth Sahib is also preserved in the Sikh Gallery of the Shahi Qila in Lahore. In 2016, at the request of the then Sikh Member of Provincial Assembly Sardar Ramesh Singh Arora, the Punjab Archeology Department submitted a reply in the assembly that they had only one scripture of Guru Granth Sahib preserved in the Sikh Gallery of Shahi Qila.

However, according to the Pakistan Sikh Gurdwara Parbandhak Committee, the 10th guru, Gobind Singh Ji, declared the 1,100-paged version of Guru Granth Sahib as obsolete. The existing Guru Granth Sahib consists of 1,430 pages. The scripture of the Guru Granth Sahib preserved in the Lahore Museum is ancient and handwritten.

The holy book of Sikhism has been placed in the Palki Sahib as per the Sikh community’s religious tradition and there is fear among Sikh followers that this ancient scripture will be lost if it is repeatedly touched. The Guru Granth Sahib has been kept in a safe place Palki Sahib, behind glass, in the museum of Lahore so that it cannot be touched and remains preserved.