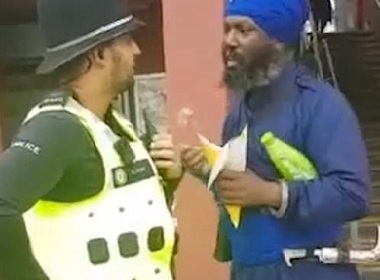 A Sikh man was detained by a police officer for openly carrying a ceremonial dagger in public - even though he is legally allowed to carry it.

The suspect, who has the kirpan in a sheath on his waist, tells the officer: 'I'm a Sikh I can carry this if I want to.' The incident happened on Bull Street in Birmingham and was uploaded to various social media pages yesterday, with a woman in the clip claiming it was over the ceremonial dagger.

Last year the UK government made an exemption to the 2018 Offensive Weapons Bill to allow Sikhs to carry kirpans for religious reasons. The clip shows a the man - who was not arrested - dressed in a traditional blue garment with a curved Kirpan about a foot in length strapped around his waist. The police officer is seen talking on the radio requesting back-up from other officers.

The officer then begins to explain the situation and why the man was stopped. The man just replies: 'Why, why, why?' The man begins to raise his voice as he speaks to bystanders. The policeman then talks into his radio once more saying: 'He's a little bit aggro with me.'