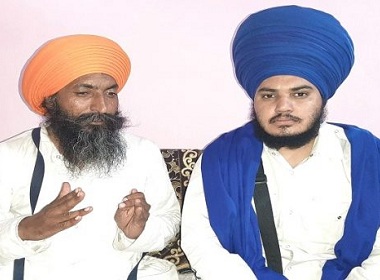 CHANDIGARH, Punjab—The Majha based Sikh outfit Sikh Youth Federation Bhindranwala has stated that the BJP led saffron Indian government has committed a historic mistake by scrapping Article 370. The SYFB leaders have said that the Indian government should keep it in its mind that the Kashmir issue can’t be resolved by robbing the rights of Kashmiris.

In a press note shared with Sikh24, the SYFB president Bhai Balwant Singh Gopala and senior vice president Bhai Ranjit Singh Damdami Taksal have said that the Kashmir is the motherland of Kashmiris. “Imposition of dictatorial decisions by the Hindutva leaders on Kashmiri masses can’t be justified at any cost,” they said.

Instead of resolving the Kashmir issue, the BJP has made this issue more complicated by scrapping Article 370. The SYFB leaders said that the fight for freedom by the Kashmiri masses will now attain a new peak. They demanded UNO’s intervention in Kashmir issue, so that the Kashmiri people could get justice and peace could prevail in J&K.