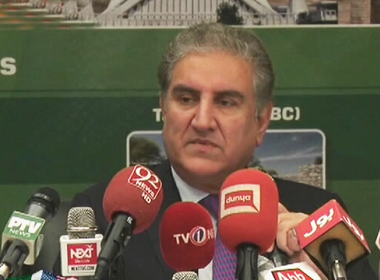 ISLAMABAD: Foreign Minister Shah Mehmood Qureshi clarified on Thurs­day that Pakistan remained committed to completing and opening the Kartarpur corridor and that its support for the Afghan peace process would remain unaffected despite the slide in ties with India after it annexed occupied Kashmir.

He was addressing a press conference a day after the National Security Committee (NSC) decided to downgrade bilateral ties with India and expel its high commissioner, suspend bilateral trade, undertake a review of bilateral arrangements, raise the matter with the United Nations Security Council and observe Independence Day on Aug 14 as a solidarity day with the Kashmiris and India’s independence day on Aug 15 as a black day.

Mr Qureshi’s presser was more of an explainer on the measures announced by the NSC so as to end the confusion surrounding those decisions. On the Kartarpur corridor, he said the project remained intact as far as Pakistan was concerned because the country respected all religions, adding that it was being undertaken on Pakistan’s initiative and in accordance with the decision that people-to-people contacts would not be impeded. “We neither had any design nor were we playing games,” he added.

The foreign minister urged Indian Sikhs to ask their government whether it would continue with the project or review it. “We are ready to welcome our Sikh brothers and sisters for Baba Guru Nanak’s 550th (birth) anniversary,” he maintained. Qureshi says Pakistan’s facilitation of Afghan peace process will not be affected by escalation in tensions with India Pakistan and India had in November last year started the construction of the visa-free corridor. Islamabad had proposed the corridor to narrow trust deficit with New Delhi, which India readily accepted. Pakistan was to construct a four-kilometre-long corridor from the border to Gurd­wara in Kartarpur Sahib, whereas India was to construct and develop the corridor from Dera Baba Nanak, in East Punjab’s Gurdaspur district, to the international border. The corridor is being constructed to coincide with the 550th birth anniversary of Baba Guru Nanak, the founder of Sikhism, in November this year.

Pakistan and India were before the lowering of diplomatic ties negotiating the agreement governing the operation of the corridor and were believed to have made substantial progress. Foreign Minister Qureshi said people-to-people contacts between the two countries would continue. However, his statement ran contrary to the suspension of Samjhota Express — a biweekly train service operating between India and Pakistan. He parried a question that his pronouncement on people-to-people contacts was not in accordance with the government action of suspending the train service.

He said Pakistan’s response to the Indian action on Kashmir was in diplomatic, political, legal domains and it was not looking to military aspect. “The first line of defence is the diplomatic offensive and Pakistan is using the first line,” he emphasised. Mr Qureshi used the occasion to warn that India could carry out false flag operation in held Kashmir to distract world’s attention on its human rights abuses and create a pretext for intensifying crackdown on the innocent Kashmiris protesting against its illegal occupation of their motherland.

Regarding Prime Minister Imran Khan’s statement directing the armed forces to remain vigilant, he said that in view of heavy military deployment by India, Pakistan was right in being watchful and putting in place safeguards against possible aggression. Asked if the downgrading of ties meant operation of diplomatic missions at a lower level, he said it was possible that the size of diplomatic missions would be cut and travel restrictions could be imposed on the diplomatic staff. In reply to a question about the possibility of Pakistan reviewing its decision to lower the level of ties, the foreign minister suggested that it could happen only if New Delhi too reviewed its action that led to Islamabad’s response. “This will not be one way, it has to be a two-way thing,” he said.

Mr Qureshi said Pakistan’s facilitation of the Afghan peace process would not be affected by the escalation in tensions with India. He clarified that the decision to suspend trade with India was limited to Pak-India trade, while Afghan trade happening through Wagah would continue.