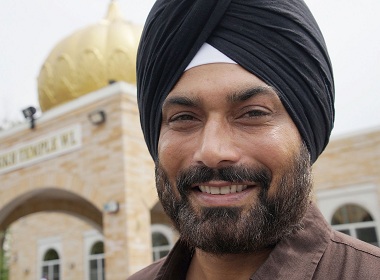 The Interfaith Conference of Greater Milwaukee (IFCGM) brings together regional leaders from 20 faith denominations. The organization has worked to establish dialogue, build relationships, counter hate and fear, and develop programs that not only foster understanding and friendship but also champion social issues to help create a better society for everyone in region.

The organization turns 50 in 2020 and was led by Tom Heinen for the past decade. Now, the Interfaith Conference has new leadership. Pardeep Singh Kaleka became its new executive director in June. Kaleka has been of service to his community throughout his many careers. He’s also a co-founder of the organization Serve2Unite. “I have always been very spiritually driven,” said Kaleka. “And I think even as a police officer, as an educator, as a therapist, as a counselor – I never wanted to do something that was going to take me to a place where I did it for money or I didn’t do it for a reason that wasn’t of service.”

He was first introduced to the IFCGM shortly after the 2012 Sikh temple shooting in Oak Creek. The hate crime left six people dead and four others wounded, and the killer later committed suicide. Among those who died was Kaleka’s father, Satwant Singh Kaleka. The IFCGM brought religious communities together to counter the hate attack and those happening across the U.S. and the world.

“I just really admired what they were doing and through that process developed a friendship with Tom Heinen,” said Kaleka. He noted that his deeper spiritual journey also started after the temple shooting. Although his parents were devout Sikhs, and his father Satwant Singh Kaleka founded the Oak Creek Sikh Temple, Kaleka admitted that he never thought he would someday lead an organization like the IFCGM.

“I saw my parents go to the gurdwara probably four to five days a week, sometimes every day of the week, and I never thought to myself that I’m going to grow up and embrace the role of religion or organized religion,”Kaleka noted. As executive director of IFCGM, Kaleka said he wants to help people think about spirituality differently. “When you think about spirituality, sometimes as a child we think about religion and we oftentimes don’t connect that to service,” said Kaleka. “You can be of service to people within your own religious community, but how do you become of service to people outside of that?”

Kaleka also wants to break down any misconceptions people may have about the role religion plays in people’s lives, as well as the IFCGM itself. “Are we teaching you about religion? That’s not the case. What we’re teaching you is how people navigate their life by the spiritual belief that they have, and that’s different,” explained Kaleka. Going forward, Kaleka says his top priorities for the IFCGM will be combating hate attacks and creating better work environments for people of all practicing faiths.

“We know that nationally and internationally hate attacks are up against places of prayer, so that’s a very real need,” said Kaleka. Ultimately, Kaleka said it is important to continue the work of breaking down silos and encouraging people to listen for understanding rather than judgment. He hopes to continue that work within his new role as executive director of the IFCGM while respecting and building relationships with all of the faith leaders involved.

“I want people to know Interfaith as much as they know the other big nonprofits in Milwaukee,” added Kaleka. “Even when you say ‘interfaith,’ you’re almost accepting and saying, ‘OK, there are other faiths out there.’ And if we can build that subconscious, I think we can succeed.”