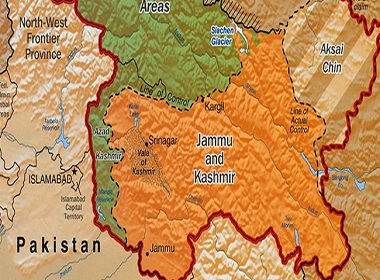 LONDON: The August 5, 2019 will forever be etched in the memory of people in Jammu Kashmir as a black day.

It will be remembered as a day when the so-called largest democracy in the world, illegally annexed the entire Indian occupied part of Jammu Kashmir with a stroke of a pen, and took away the heritage, the identity, hard fought fundamental rights, and centuries old ethnic, cultural and religious harmony and tolerance amongst the sons and daughters of the soil, says Jammu Kashmir Liberation Front (JKLF) in its press release on Wednesday.

It says the August 5, 2019 will be remembered as a black day because, on this day millions of sons and daughters of this beautiful but unhappy land, were imprisoned in their homes by 820,000 Indian military and paramilitary troops at the point of gun under orders from a communalist and hegemonic BJP/RSS government in Delhi.

The 5 August, 2019 will be forever marked as a black by the people of Jammu Kashmir because, on this day millions of the citizens of Jammu Kashmir were not treated as members of humanity. This day will also be marked as a black day because, on this day the BJP/RSS government under the erroneous rule of might is right, disregarded the international law and legality, and forcibly annexed a country, and its people whose political status is yet to be determined by themselves through the exercise of their fundamental, inherent and inalienable sovereign right to self-determination.

On 5 August 2019 therefore, the BJP/RSS government of India has thrown an open challenge to the world community by completely disregarding its obligations under the United Nations Charter, and the inherent and inalienable sovereign right of the people of Jammu and Kashmir to self-determination under the UN Charter and over some 18 UN resolutions on the Kashmir issue/dispute -conflict. Therefore, the legitimate and just struggle to regain the lost sovereign right of free will, by people of Jammu Kashmir and Ladakh, will continue until victory, the press release concludes. Meanwhile, World Sikh Parliament in its press release also condemned illegal occupation of held Kashmir by India and termed it a bid to disturb peaceful efforts to solve Kashmir solution.

The unilateral moves by the Indian state this week aimed at annexing the disputed territory of Kashmir, forced through by locking down the people and neutralising all democratic processes, should make it clear that this is a crisis that cannot any longer be left to some vague hope of 'bipartisan' Indo-Pak resolution. Anyone who is serious about peaceful conflict resolution in the region must grasp the issues now before they spiral in to catastrophic warfare that could threaten millions as three nuclear armed states square up over India's latest reckless and unlawful moves.

Attached is a statement issued by the World Sikh Parliament that sets out the Sikh perspective and which is being shared with the relevant global powers at this critical time. Meanwhile, the World Sikh Parliament unreservedly condemns India’s brazen attempt this week to override international law and democratic legitimacy by unilaterally purporting to divide and annex Kashmir, says World Sikh Parliament in its press release on Wednesday. It adds these moves by New Delhi were overseen by a massive military build-up aimed at terrorising the very people whose destiny, like that of the Sikhs in recent decades, is being stolen by a Hindutva agenda bent on creating a Hindu state extending well in to the territories of neighbouring national homelands. They were taken with absolutely no attempt to engage with Kashmiris or the UN (which has recently, quite rightly, reiterated the need to respect Kashmiri self-determination), and underline India’s record as a serial violator of fundamental human rights.

Having experienced the same pattern of betrayal – Sikhs were promised a national homeland in independent India only to be denied even recognition as a nation as well as a distinct religion post 1947 – we now also apprehend a massive military crackdown of genocidal proportions in Kashmir, as was used to suppress the Sikh self-determination struggle in the decade after India’s invasion of Punjab in June 1984. The international community must intervene urgently to prevent the deaths of tens of thousands of Kashmiri non-combatants at the hands of PM Modi’s henchmen.

Just as importantly, it is time world powers realised that the right-wing agenda in India is quickly paving the way to further military conflict with not only Pakistan but China. Both neighbouring states have warned India that its Article 370 abrogation and ‘union territory’ annexation moves are not only illegal but constitute a direct challenge to their own longstanding territorial claims. The prospect of these three nuclear armed powers turning to full scale war to ‘resolve’ the crisis is both real and alarming.

As highlighted at the World Sikh Parliament’s conference in May 2019 in Birmingham, the only realistic long term prospect of resolving territorial disputes and avoiding catastrophic conflict in the region is to implement the right of self-determination in both Kashmir and Punjab, so that buffer states representing the democratic mandate of the people can take shape and prevent a war that may cost tens of millions of lives. The physical separation of these warring states at sensitive border areas is long overdue, the press release adds. “We urge Sikh military personnel not to take part in any Hindutva aggression against either unarmed civilians or, when it comes to it, Pakistan or China. They should instead endeavour to establish themselves in a defensive posture to protect the Sikh homeland and its population from the fall out of a dispute which the Sikh nation is not a party to,” it says.

The press release said, “The Indian government has spent the past months intensively propagandising against the Sikhs in foreign capitals, labelling our legitimate and lawful freedom struggle as a terrorist enterprise; the irony is that the very same Narendra Modi, Amit Shah and Ajit Doval will now be desperately looking to Sikh soldiers to defend them when they have clearly overstepped red lines abroad. These foolish adherents of a fascist ideology are about to learn that the Sikhs value their own nationhood and egalitarian outlook, not the caste-ridden Hindutva vision of Brahmanical society that targets minorities in a cowardly and contemptible manner.”

Sikhs and Kashmiris will, on 15th August 2019, jointly protest outside the Indian High Commission in London (as well as other Indian missions around the world) against India’s unlawful colonial practices and its unabated human rights abuses. They will assert their right to self-determination and make it clear to Indian diplomats and the international community alike that their national homelands, where they are the majorities, must be freed if enduring peace is to be restored to the region, the press release maintains.