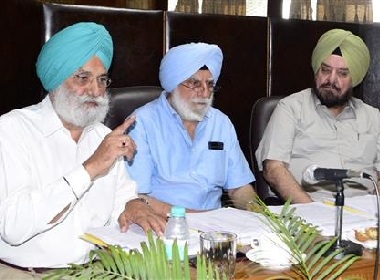 KCGC to Organize International Kirtan Darbar on Nov 2, to open Two Colleges and a School

The decision was approved in the general house meeting of the Council here today. The meeting which was held under Rector Lakhbir Singh Lodhinangal in which President Satyajit Singh Majithia, vice President Swinder Singh Kathunangal and honourary secretary RMS Chhina were also present. The Ragis from all over India and Pakistan would be invited for the recitals that will extend to the midnight, said the authorities.

The Jathedars of five Sikh Takhts, top Ministers from Union Government, Governors and Chief Ministers of various states including Punjab, Haryana, Himachal and Bihar, Chiefs of various Sikh bodies including SGPC, representatives from Pakistan Gurdwara Prabandhak Committee, Sikh Societies from US, Canada and UK will be participating in the Kirtan Darbar. The top Sikh leaders and those who have contributed to the deliverance of Guru Nanak’s philosophy would be honoured at the occasion.

``More than 10,000 persons are expected at this mega religious program. It will be aired live throughout and hymns from the Gurbani of Guru Nanak would be recited from evening to the midnight”, said Chhina in a press statement issued here today. Apart from this the KCGC, he said today decided to open Khalsa College Ghugh near Jalandhar along with a Khalsa College Public School Ghugh and another Khalsa College of Commerce and Humanities at Ranjit Avenue in the `holy city’ here in remembrance of Guru Nanak’s anniversary.

The national and international seminars, publication of a highly presentable Coffee Table Book on the lives and teachings of Guru Nanak, Debates and Discussions on Guru’s philosophy would also be held. The programs will have representatives from various Sikh bodies from the Diaspora, said he adding that the sports tournaments, plantations drives would also be initiated to markt eh historic anniversary of the Guru.