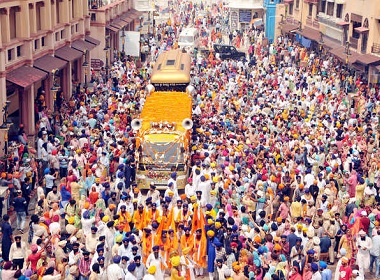 The procession will enter the state from Jaijon in Punjab. Hectic preparations are underway to welcome the delegates. The procession will be received by SGPC member Daljit Singh Bhinder. On April 12, 1801, Sikh ruler Ranjit Singh was coronated as maharaja by Baba Sahib Singh Bedi, direct descendant of Guru Nanak. In return, the Emperor handed over the 'jagir' of Una to Baba Sahib Singh, who contributed in the fight against the Mughals from his base in a fortress in Una city. Since then, a gurdwara situated in ‘Quila’ Baba Bedi in Una city is revered by the Sikh community as a holy seat.

Baba Sarabjot Singh, a descendant of Baba Sahib Singh who lives in the ‘Quila’ Baba Bedi, will also be present to welcome the nagar kirtan. Baba Sarabjot Singh said it was a matter of great privilege that the nagar kirtan from Nankana Sahib was visiting various Sikh shrines in the country, where Sikh leaders had not only fought for preserving the unity and integrity of the country, but had also preached spirituality.

He said the Sikh community wanted that the daily express train between Amritsar and Nangal be extended to Una. He said a formal request to the Ambala railway division was being sent.