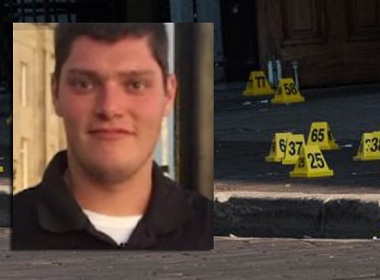 ‘It just keeps happening:’ 3 mass shootings in a week ahead of Sikh Temple tragedy anniversary

OAK CREEK -- The two mass shootings in El Paso, Texas and Dayton, Ohio within 13 hours on Saturday, Aug. 3 and Sunday, Aug. 4 happened as people in Wisconsin prepared to remember the six people who lost their lives the shooting at the Sikh Temple of Wisconsin in Oak Creek on Aug. 5, 2012.

A masked gunman in body armor opened fire early Sunday in a popular entertainment district in Dayton, Ohio, killing nine people, including his sister, and wounding dozens before he was quickly slain by police, officials said. Connor Betts, 24, was armed with a .223-caliber rifle with magazines capable of holding at least 100 rounds of ammunition and squeezed off dozens of shots before he was gunned down no more than 30 seconds after his rampage began, police said.

On Saturday morning, police said a shooter opened fire at Walmart in El Paso, Texas, killing 20 and injuring 26. Sources told CNN the suspect is Patrick Crusius, 21, of Allen, Texas. Federal authorities were treating the shooting as a case of domestic terrorism, the El Paso County district attorney said, and the Justice Department was "seriously considering" bringing federal hate crime and federal firearm charges, which carry a possible death penalty. Authorities were investigating a racist, anti-immigrant document they believe was posted by the shooter.

This, as the seven-year anniversary of the shooting at the Sikh Temple in Oak Creek approached. Experts say while still rare, these shootings seem ever-present, presenting a challenge to us all. "One of the reasons why we have become, I guess, inured to this, is that it just keeps happening," said Chris Morano, a licensed psychologist that specializes in children and trauma. "So we also have this sense that we're just going to keep going."

We seemingly keep moving forward until another tragedy unfolds. Sunday, Aug. 4 marked one week since a gunman opened fire at the Gilroy Garlic Festival in Gilroy, California, killing three people and injuring 13 others. Police said 19-year-old Santino Legan died of a self-inflicted gunshot wound. Legan's social media raised questions after he urged his Instagram followers on the day of the attack to read a 19th-century book popular with white supremacists on extremist websites.

"Part of the challenge is that we've got to give coverage to these events, and talk about them, if only to begin to problem solve around them, but by doing so, they get -- gain a lot of momentum," said Morano. Morano or his team have helped with such tragedies as the Route 91 Harvest music festival Oct. 1, 2017. Stephen Paddock opened fire on a crowd of concertgoers, killing 58 people and wounding 422. The ensuing panic brought the injury total to 851.

Morano said ultimately, what drives such events are a sense of powerlessness or marginalization. While many aren't directly affected by the gun violence seemingly splayed across television screens at an alarming clip, Morano said anxiety is a common reaction to these continued assaults. "So yes, there can be paralyzing anxiety, but by-in-large, most of us will begin to figure out how to go on with our regular lives at some point," said Morano. Morano said it's important to take proactive steps -- volunteering, donating blood, or practicing self-care, meditation, or exercise.

"We've got to do things to be proactive, and contribute to whatever solutions we think fit our values," said Morano. Another thing Morano said we should be mindful of is how we act around children in response to instances of violence, as kids often take cues as to how to act from their parents. He said the best way to help kids deal with anxiety is to get them moving, playing, and to be as present as possible.