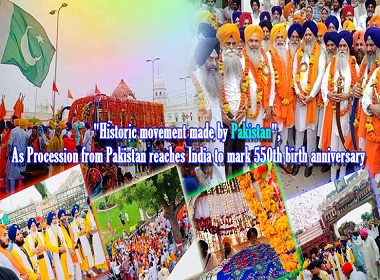 "Historic movement made by Pakistan", As Procession from Pakistan reaches India to mark 550th birth anniversary of Sikh

In a first since Independence, a ‘Nagar Kirtan’ (religious procession) that started from Nankana Sahib district in Pakistan’s Punjab province entered into Punjab on Indian side via the Attari-Wagah land route Thursday to mark the 550th birth anniversary celebrations of Guru Nanak Dev, the founder of Sikhism. The ‘Nagar Kirtan’ began from Gurdwara Nankana Sahib, the birthplace of Guru Nanak Dev in Pakistan, and crossed over to India in the afternoon with around 500 Sikh devotees who crossed the border carrying the holy Guru Granth Sahib on their head.

The Shiromani Gurdwara Parbandhak Committee, which had organised the procession, termed it a historic moment and a first in 72 years.

An SGPC official said the holy book was brought to Wagah border on a vehicle. A large cavalcade followed the procession amid a thick security cover.