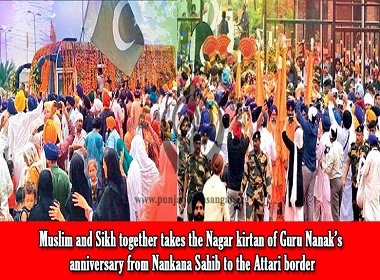 Not only Sikhs from Nankana Sahib and Hindu followers of Guru Nanak Dev participated in a nagar kirtan, but many Muslim families of Nankana Sahib accompanied it to Wagah border in their vehicles on Thursday.

Dedicated to Guru Nanak’s 550th birth anniversary, the SGPC began an international nagar kirtan from Gurdwara Nankana Sahib, birth place of Guru Nanak, after the bhog of akhand path. The palanquin of Guru Granth Sahib was placed in a flower-decked bus, which was led by panj piaras. The ‘ardasiya’ of Golden Temple, Bhai Sultan Singh, performed the ardas before beginning of the nagar kirtan. It passed though the Sikh-populated areas of old Nankana Sahib, including Mohalla Bal Leela, before heading for Wagah border amid heavy security.

Procession enters India at Wagah borderA large number of Sindhi followers of Guru Nanak, Sikh and Muslims from Nankana Sahib accompanied the process in their vehicles up to Wagah border. Pakistan’s Khalistani Sikh leader Gopal Singh Chawla whom the government had removed from both Pakistan Sikh Gurdwara Parbandhak Committee (PSGPC) and Evacuee Trust Property Board (ETPB) under India’s pressure was seen standing near the dais with the Indian Sikh leadership before beginning of the nagar kirtan.

TOI also spoke to a Muslim shopkeeper of Nankana Sahib, Kashif Khan, who, along with his family members, was travelling to Wagah border along with the religious procession. “Baba Nanak is revered by all and it’s a matter of pride for us that the holy saint was born at Nankana Sahib.” He said there were many Muslim families like theirs who were accompanying the nagar kirtan.