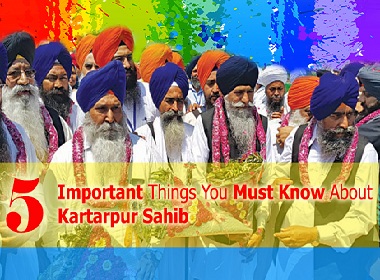 5 important things you must know about Kartarpur Sahib

The construction of the Kartarpur corridor is much in news these days. Let us discuss the importance and why it is among the holiest of holy shrines in Sikhism.

Firstly I like to tell you the purpose for the opening of Kartarpur Sahib corridor is to enable the pilgrims from Indian and all over the world to visit this holy place and the most notable thing is pilgrims are allow to visit Kartarpur Sahib without visa.

Why it is among the holiest of holy shrines in Sikhism? Answer to above question is because it is the last resting place of Guru Nanak Dev Je. It is believed Guru Nanak Dev Je lived here for 18 years until 1539. After traveling through different places he settled down in Kartarpur Sahib.

Guru Nanak Dev Je spent a simple and peaceful life he used to wear cloths of a householder. He used to spend his morning in farming and nights while praying.

Guru Nanak received a gift during his tour to Makkah which is preserved as chola(robe).

Once its original structure was destroyed by floods. It was reconstructed by Bhupinder Singh. A well was discovered while digging the enclosure of the shrine and it is believed to be 500 years old and been built during the lifetime of Guru Nanak Dev je.

The construction of the Kartarpur corridor is expected to be completed before 550th birth anniversary of Guru Nanak Dev Je which is a big and long awaited gift for the Sikhs and so far the pilgrims will be able to visit the holy shrine.