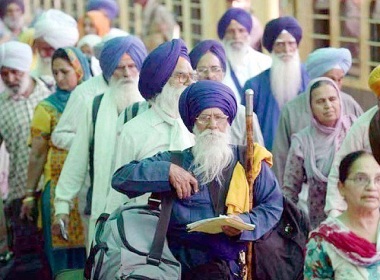 Evacuee Trust Property Board (ETPB) Chairman Dr Amer Ahmad, Pakistan Sikh Gurdwara Parbandhak Committee (PSGPC) Pardhan Sardar Tara Singh and other officials will receive the yatrees at the station. The Pakistan government has made foolproof security arrangements besides provision of immigration, customs, bank and medical facilities at the Wahga railway station to provide help to pilgrims. Official sources said that the ETPB had made the best arrangements including accommodation, transport and food for the Sikh yatrees besides foolproof security.

Soon after arrival, the Sikh pilgrims will leave for Gurdwara Dera Sahib and they will stay for two days there, where the main ceremony (Bhong Ahand Paath Sahib) will be held on June 16. The ETPB chairman and Sikh leaders would participate in the ceremony. On June 17, the Sikh pilgrims would leave for Gurdwara Darbar Sahib Narowal and perform religious rituals and return to Lahore on the same day. On June 18, the yatrees will leave for Punja Sahib Hassanabad and stay for two days to perform religious rituals.

On June 20, they will go to Gurdwara Janamasthan Nankana Sahib and stay there. On June 22, they will visit Gurdwara Sucha Suda Farooqabad and later they will come back to Gurdwara Dera Sahib Lahore on the same day. The Indian Sikh yatrees will go back to their homeland on June 23.