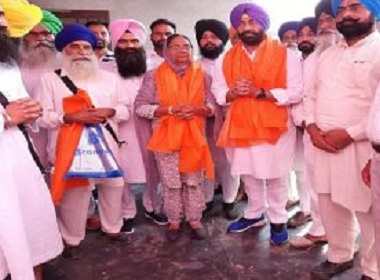 TARN TARAN SAHIB, Punjab—Replying to the District Election Officer’s notice regarding violation of model code of conduct, the PDA’s candidate Bibi Paramjit Kaur Khalra has said that the message of living Sikh master Sri Guru Granth Sahib Ji was not only for the Sikh community but for the entire humanity. She wrote in her reply that Sri Guru Granth Sahib Ji teaches the principles of equality, helping the needy and meek ones, eradication of the caste system and welfare of entire humanity so she doesn’t find anything worth objection in following this ideology to contest the elections.

“I dolor that you have sent me the show-cause notice on the complaint of those who once tried to oppress this great ideology with the use of tanks and by backing sacrilege episode,” she wrote. Bibi Paramjit Kaur Khalra further wrote that she has not cheated with her constituents like the Punjab CM Captain Amarinder Singh did by taking oath of Gutka Sahib during the Punjab assembly polls. “I think, this issue doesn’t need further heed as no one has any right to challenge the secularist and humanitarian ideology taught by the living Sikh master Sri Guru Granth Sahib Ji,” she added.

It may be recalled here that after being pressed by the Shiromani Akali Dal and Congress, the District Election Officer of Tarn Taran had issued a show-cause notice to Bibi Paramjit Kaur Khalra on April 20 for terming Sri Guru Granth Sahib Ji as her election manifesto. She was asked to submit a clarification within 48 hours.