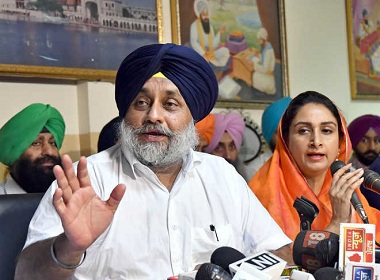 Harsimrat Badal to contest from Bathinda, Sukhbir from Ferozepur

The Shiromani Akali Dal has announced Sukhbir Singh Badal as its Lok Sabha candidate from Ferozepur and Harsimrat Kaur Badal from Bathinda.

SAD patron Parkash Singh Badal announced the candidates on Tuesday morning. Later, Badal praised Prime Minister Narendra Modi, saying Congress president Rahul Gandhi is still inexperienced in politics. “Rahul has no administrative experience, never served as a minister or CM. Even for getting a driving licence you should know how to drive; so if one has to become PM one needs experience,” Badal said.

Talking about the recent air strike, Badal said Modi had isolated Pakistan at the international level. “Capt Amarinder Singh promised several things--debt waiver and wiping out drugs—and fooled people before forming the government. The Congress attacked the Akal Takht and snatched our river waters, whereas Modi took the decision to open the Kartarpur Sahib corridor besides taking other landmark decisions.