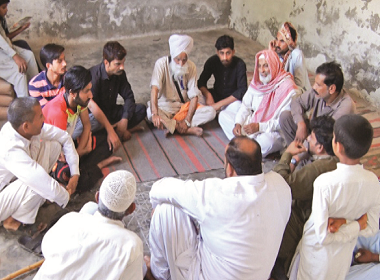 LAHORE: Having lived in India for the last 70 years, Sardar Arsal Singh Dhalu long dreamed of crossing the border into Pakistan to visit his place of birth. The decades-long wait finally came to an end this year as the practicing Sikh set foot on his ancestral turf of Dogaij village.

Now 75, Dhalu sorely missed the place where he spent his childhood. “I had always dreamt of visiting my village one day and now my dream has come true.” Dhalu lives in Shoura, a village of Amritsar. Before 1947, his family had settled in Dogaij, a border village of Lahore. He tried to refresh his childhood memories and enjoyed scenic views on the 45-minute journey from Gurdwara Dera Sahib Lahore all the way through to his village. It took him almost 45 minutes to reach his village.

Dogaij Village Chairman Malilk Qasim and locals warmly welcomed Dhalu. He shared memories with the elders of the village and tried to learn more about his ancestors. He was just five when his family moved to India, lock stock and barrel. Therefore, he doesn’t remember the exact location of his house. “I longed to visit my birthplace at least once before I die. In 2017, when I visited Pakistan for the first time, my strict pilgrimage schedule didn’t allow me to move anywhere else.”

Dhalu shared that his grandfather’s brothers, Sardar Natha Sing and Sardar Lakha Singh, used to live with their families in this village. Talking to The Express Tribune, Malik Qasim said that the family of Dhalu was called Gunde Wasi. “They were one of the richest families in the village,” he claims. Haji Mohammad Shafi, the oldest person in the village, also met Dhalu. “The palace (haweli) where the Dhalu’s had family lived it is still known as Haweli of Lakha Singh and its remains are still present,” he says. Shafi also shared his memories with Dhalu and mentioned the names of his friends.

Dhalu visited many streets and tried to find his house, but failed. “I don’t remember my house at all as things have completely changed after 71 years,” says Dhalu. He adds he is happy that he at least the visited places where his ancestors had once set foot and the streets on which he once played as a child.