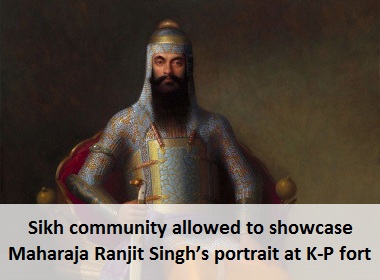 PESHAWAR: In a goodwill gesture, the authorities in Khyber-Pakhtunkhwa (K-P) province have allowed the Sikh community to showcase a portrait of Punjab’s first Sikh ruler Maharaja Ranjit Singh at the art gallery of historic Bala Hisar Fort.

The decision was taken by Inspector General Frontier Corps (FC) North Region, Major General Rahat Naseem on Tuesday after meeting with a Sikh delegation in Peshawar over the weekend. The IG FC also allowed the community to celebrate Maharaja Ranjit Singh’s birth anniversary at the castle in a goodwill gesture lauded by the community members.

Meanwhile, the Sikh Community has welcomed the gestures toward the Sikh Community and vowed that they would stand shoulder to shoulder with the security forces of the country. Maharaja Ranjit Singh had ruled the Northern Indian states in the early half of the 19th century. He fought his first battle alongside his father at the age of 10. After his father died, he fought several wars to expel the Afghans in his teenage years and was proclaimed as the “Maharaja of Punjab” at age 21.

His empire grew in the Punjab region under his leadership through 1839. Apart from locals and Indian nationals, Sikh devotees from Canada, UK, Malaysia and other countries flock to Pakistan to celebrate his birth and death anniversaries every year.

They participate in the main religious ceremony at his tomb situated at Gurdwara Dera Sahib in Lahore after visiting several religious sites scattered across Pakistan.