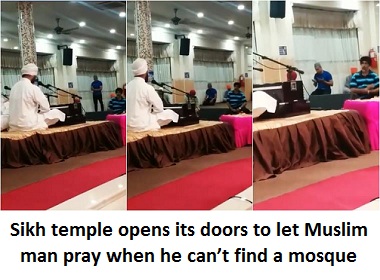 Sikh temple has been praised for opening its doors to let a man pray when he allegedly couldn’t find a mosque.

The man was spotted in Gurdwara Sahib Bercham Ipoh in Malaysia praying while Sikh hymns were being sung on the microphone. The video, taken from the front of the Sikh temple hall, shows the Muslim man in a blue t-shirt praying towards Mecca during the hymns.

Despite a history of animosity between the religions, no one appears to interrupt him as he carries out his Namaz (prayers) near the Guru Granth Sahib (Sikh holy scripture). The heartwarming footage was made public after a group called Sikh Inside shared it earlier this week.

They wrote: ‘A Muslim brother spotted doing Namaz [prayer] in Gurdwara Sahib Bercham Ipoh. Probably he couldn’t find a mosque and drop by Gurdwara to complete his Namaz.

The inspiring video, which has already been viewed more than 45,000 times on Facebook and Twitter, has been praised by thousands and proves that Love always prevails.