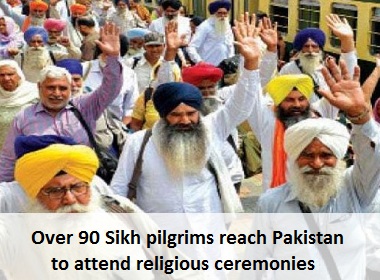 A group of around 96 Sikh pilgrims reached Pakistan via Wagah border to attend their religious ceremonies.

As per details, Sikh pilgrims hail from Canada, U.S and England who reached Lahore from New Dehli on Monday. The pilgrims asserted that they are not frightened at all after coming to Pakistan in the wake of recent Pak-India escalation. “We feel like we have come to our second home,” pilgrims said after arriving in Lahore.

After visiting their religious places in Lahore, the group of pilgrims will depart for Nankana Sahib tomorrow. The visit will be concluded after five days, after which the Sikh pilgrims will leave for India via Wagha border. Read More: US-based Sikh body assures full support to Pakistan against Indian aggression

Moreover, the government of Pakistan has also accorded approval to Sikh pilgrims from India for their visit to the country and approved the schedule of Baisakhi festival 2019 due in April. According to Evacuee Trust Property Board (ETPB), Pakistan will issue visas to 3,000 Indian Yatris for pilgrimage for 10 days. Prime Minister Imran Khan has issued special directives for the arrangements of Baisakhi Festival.

It is worth mentioning that recently a US-based Sikh advocacy group denounced India’s violations of Pakistani airspace and assured Pakistan of full support against Indian aggression. “If India ever attacked, the overseas Sikhs will extend full support to Pakistan and will stand shoulder to shoulder in thwarting any Indian attack,” said Sikhs For Justice (SfJ) in a letter to Prime Minister Imran Khan.