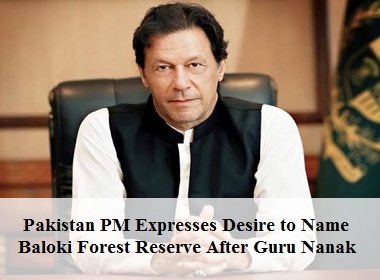 Pakistan Prime Minister Imran Khan has requested the administration to develop Baloki Forest Reserve under Baba Guru Nanak and also desire to establish a university in his name. He said during the launch ceremony of the Spring Tree Plantation 2019 and Natural Reserve at Balloki in Nankana Sahib on Saturday.

Taking it to the micro-blogging site Twitter, he wrote, “I would like to request the administration to name the Baloki Forest Reserve after GuruNanak and also desire to establish a University in his name.” According to media reports, Khan also said that massive arrangements would be made on the 550th birthday anniversary of Baba Guru Nanak this year. He even assured the Sikh community that all possible facilitation would be provided to them on the Kartarpur Corridor issue.

Last year, India and Pakistan had laid the foundation of the much-awaited Kartarpur Corridor. Both countries had agreed to open the corridor for the Sikh devotees for Baba Guru Nanak’s 550th birth anniversary. The decision came after Narendra Modi-led government had cleared a proposal to develop a corridor from Dera Baba Nanak in Punjab’s Gurdaspur district to the International Border to facilitate Indian pilgrims to visit Gurdwara Darbar Sahib in Kartarpur in Pakistan. (ALSO READ: Kartarpur Corridor: Pakistan Calls India’s Response to Invite Positive; Sushma Swaraj, Amarinder Not to go)

The Kartarpur Corridor will facilitate the visa-free travel of Indian Sikh pilgrims to Gurdwara Darbar Sahib in Kartarpur. Thousands of Sikh devotees from India visit Pakistan every year to celebrate the birth anniversary of Guru Nanak.