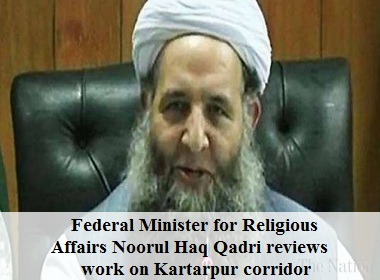 KARTARPUR/SIALKOT - Federal Minister for Religious Affairs Noorul Haq Qadri on Sunday reiterated his government's to ensure basic rights and religious freedom to minorities and protect their places of worship in the country.

The federal minister said that the minorities have been enjoying complete religious freedom in Pakistan. He also lauded role of the minorities in national development, prosperity and in promoting religious harmony. He reviewed in details work on the establishment of Kartarpur Corridor. He directed the officials concerned to ensure timely completion of the mega project to facilitate the Sikh Community by giving them visa-free entry to Gurudawara Darbar Sahib Kartarpur-Shakargarh (Pakistan) through Kartarpur Corridor from India.

The officials said that the Kartarpur Corridor would facilitate the Sikh Yatrees regarding their visa-free entry to Gurudawara Darbar Sahib Kartarpur-Shakargarh enabling them to perform their religious rites there, where the Baba Jee Guru Nanak had spent the last 18 years of his life. The Federal Investigation Agency (FIA) has already established an immigration office at Kartarpur Corridor border to facilitate the Sikh Yatrees.

The corridor was a longstanding demand of Indian Sikhs so that they could visit their holy site conveniently and perform rituals. Prime Minister Imran Khan had laid foundation stone of the corridor project at Kartarpur on Nov 28, 2018 that was also attended by Indian ministers Navjot Singh Sidhu, Harsimrat Kaur Badal and Hardeep Singh Puri on the invitation of the Pakistani government.

The project also includes building of two bridges on the Ravi and on seasonal Naullah Baeen. Kartarpur Corridor, which will officially open in November this year, will be used by Sikh pilgrims coming from India on a visa-free basis to visit Gurdawara Darbar Sahib Kartarpur, the final resting place of the founder of Sikhism Guru Nanak Devji.